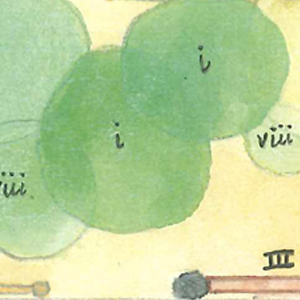 What is a Dinosaur Garden?

The James Lick Middle School Dinosaur Garden is being created to help make tangible connections for people about the earth’s changing climate.

The changes that the earth is currently going through aren’t new.  The manner by which the greenhouse gases are entering the atmosphere are new, however.  But the levels of Carbon dioxide in the atmosphere have been higher than they are now, and will continue to grow as we continue to burn fossil fuels.

The trees planted in the Dinosaur Garden are examples of trees that lived millions of years ago during the Triassic, Jurassic, Cretaceous and periods.  When Ginkgo bilobas evolved (beginning in the Permian period, then dominating much of the Northern Hemisphere in the Cretaceous period) there were higher levels of Carbon dioxide in the atmosphere.  The same goes for Sequoias, Norfolk Island and Cook Island Pines, Podocarpus and other species of plants showcased in the JLMS Dinosaur Garden.

These ancient trees are resilient and can handle higher levels of Carbon dioxide in the atmosphere, just as there was back millions of years ago.  This resilience is an inspiration that life will continue and that these students can become resilient themselves!

The DINOSAUR GARDEN @ James Lick Middle School will boast ancient plants like Ginkgo biloba, Araucaria and Cycads.  We want to build a recycled metal triceratops climbing structure by Karen Cusolito, and in May of 2017 facilitated a mural project that the youth co-created with local artist Sirron Norris.   Recycled glass trilobites created by Ivan Lee Mora will crawl along the ground building the dialogue about decomposers and carbon cycling during the Cambrian period.

Please spread the word to help us raise funds to fund this educational garden that will remind all of us how the climate has changed before and how we humans are helping to change it again. 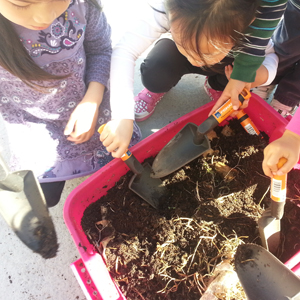 Composting in schools is an incredible way to capture resources while cultivating the minds of young environmental leaders.  CAN! supports school composting programs by promoting composting in the garden as well as promoting the use of the green cart in the lunchroom.

Composting is nature’s way of recycling.  From banana peels to dirty paper towels, here in San Francisco we can compost lots of stuff.  With the Recology industrial composting facility, Jepson Prairie Organics, in Vacaville California, San Franciscans can put useful organic material into the green bin for later reuse on farm fields throughout California.

Composting in schools is an incredible way to capture resources while cultivating the minds of young environmental leaders.  CAN! supports school composting programs by promoting composting in the garden as well as promoting the use of the green cart in the lunchroom.

Learning about the various decomposers (creatures like worms, rolly pollys and slugs and snails) that help to break down, digest and poop-out valuable compost is a fun activity for youth of all ages.  Of course, fungi and bacteria do their part as well!  Worm bins, 3-bin active composting systems and passive systems are all utilized in CAN! educational gardens in our partner schools.

Composting is something that everyone can do right away that greatly supports the climate.  Since during the rot process a lot of methane is released, composting in an open-air environment (with lots of Oxygen) helps to keep methane levels lower than if organic material were to enter the landfill.  Organic material that makes it to the landfill doesn’t get reused and ends up releasing even more methane into the atmosphere.  Since methane is 80 times worse for the climate than Carbon dioxide, composting at home and at school is a wonderful way to support a healthy and resilient climate. 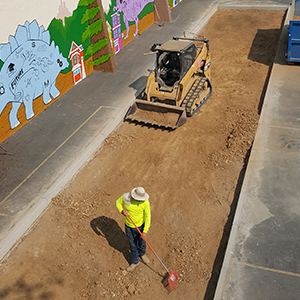 (JLMS) is one of the CAN! flagship school sites.

James Lick Middle School (JLMS) is one of the CAN! flagship school sites. Our partnership with the James Lick community began in 2015 with the CAN! Youth Ecological Stewardship program, funded by the SFPUC.

All 8th graders at JLMS participate in a tour of the Cesar Chavez home in Bakersfield, learning about farm worker movements here in California, the history of Dolores Huerta, Larry Itliong, Cesar Chavez and the United Farm Workers movement.  CAN! deepened our Environmental Justice curriculum in partnership with the school teachers, including education about organics, pesticides and other petroleum-based chemicals in agriculture, farmworker health and California watersheds in the 6th-8th-grade lessons.  This intersectionality of the CAN! the curriculum has since been expanded to our other partner sites.

Spearheading fundraising for the school beginning in 2015 with a grant ($43,000) from the SF Carbon Fund, for pavement removal and tree planting at James Lick.  But there was a problem.  One of the layers of the asphalt at the school contained asbestos and we quickly realized that our funding wasn’t going to be nearly enough.

We worked hard to find more resources for the school’s greening.  Later in the summer of 2016, the funding more than doubled with the generosity of then, District 8 Supervisor, Scott Weiner. Supervisor Weiner’s generous donation ($50,000) to the District permitted CAN! to continue planning, fundraising and project coordination of the site.  Now a California State Senator, Scott Weiner, continues to support progressive environmental and social progress at the State level.  Indeed, Senator Weiner has supported CAN! since 2013 with his office’s investment in greening at the Thomas Edison Charter Academy K-8 School also located in Noe Valley.

But our plans for greening kept growing and we continued to seek funding for site development, which came in the form of a Community Challenge Grant ($100,000) in the fall of 2016.  This funding more than doubled both of the previous investments and we passed $200,000 in funds for site greening.  This generosity, combined with thousands of dollars of investment from neighbors, CAN! fundraisers and other grant support (including an SFPA Action Grant of $5,000 for design services) brought us to where we are today.

And, after years of community building, fundraising and developing multi-agency partnerships, we were ecstatic when, in the summer of 2017, 3,126 square feet of pavement was successfully removed in the school’s upper yard.

The greening of the James Lick Middle School wasn’t easy but was a huge success for all of our investors, neighbors, teachers, administrators and especially students.

To date, CAN! successfully raised about $240,000 to develop outdoor educational gardens in the JLMS upper yard.  Check out the plans here for the CAN!-JLMS Organic Vegetable Garden which include over 300 ft2 of raised wooden vegetable beds, a 440 ft2 Outdoor Kitchen Pavilion, benches, a dry creek bed a pollinator garden, a Black Lives Matter garden and a cloud forest garden.  The other garden in the upper yard is the Dinosaur Garden, filled with ancient trees and plants, which have been around since the time of the dinosaurs.

With the upper yard greening underway, and our fundraising efforts have begun for the lower yard.  Leading the development of the lower yard, District 8 Supervisor Jeff Sheehy has provided the first installment of funding of $25,000.  This donation is significant, and we look forward to working with the City, neighbors and local businesses to raise an additional $150,000 for development of the JLMS lower yard where we plan to remove an additional 2,600 ft2 of pavement building out a Performance Stage, a Peace Garden, a Mindfulness Garden and various other features.  To learn more about this project, email us. 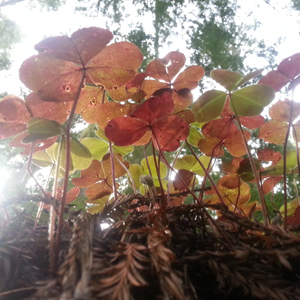 We’re all carbon-based life forms.  Plants, humans, elephants, bacteria and so on, are all based out of the element of carbon.  This fact is incredibly important when considering the capacity of the living soil to capture and store carbon from the atmosphere.  This process is called carbon sequestration.  Plants capture and store (sequester) carbon as they grow as well, but did you know that the living soil also provides this valuable service?

Climate Action Now! works with public and private communities to remove pavement to expose the living soil.  When the soil is exposed, gardeners can work compost and organic matter into the soil, providing food to beneficial bacteria and other decomposers.  Those decomposers (like bacteria, worms and rolly pollys) poop out their waste which is actually nutrient-rich compost.  Compost is full of carbon (remembering that we’re all carbon-based life forms) and pending healthy soil management, the carbon is captured and stored in the living soil. 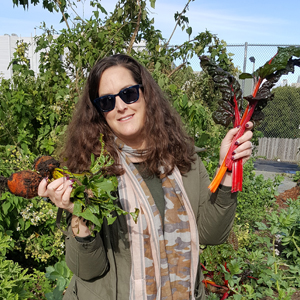 From apples to zucchini, we are totally nuts about fruit production!  Working closely with school garden educators, school Parent Teacher Student Associations (PTSAs) and the larger community, CAN! is a leader in the field of organics promotions.

All CAN! school partners have vegetables and fruits grown on site.  Students participate in the cultivation of organic food in CAN! gardens, promoting healthier eating habits.

Studies have shown that exposure to the full life-cycle of plants (from seed to compost) increases the likelyhood of students’ openness to consume vegetables, which of course promotes general health and well-being.

Your health is your wealth, and although some organic food can cost more money up front, the cost savings come back 10 fold leading to a life full of health for yourself, your farmer and the earth. 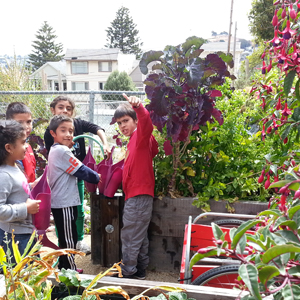 Contracting with PTAs or other partner non-profits, CAN! offers SFUSD K-8 after school garden program opportunities throughout San Francisco based on PTA and school community interest.

Garden-based after school programs can be scheduled between 5-12 weeks, whatever works best for the given school community.

From California poppies to the Coast Live Oak, the CAN! Fall 2016 After-School program is all abuzz! 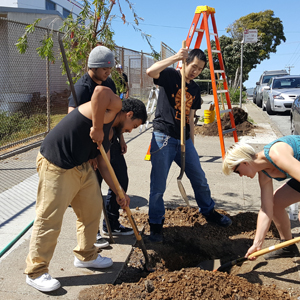 Working with K-12 classroom teachers, CAN! engages SFUSD students in hands-on activities in the classroom as well as the garden, providing the next generation of earth activators with the tools they need to make positive life choices that support a healthy mind, body and planet.